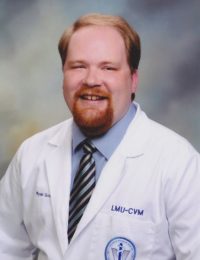 Dr. Ryan Goss grew up in East Tennessee. In 2012 he earned a BS in Animal Science at the University of Tennessee, Knoxville. In 2018, Dr. Goss earned his DVM in the inaugural class at Lincoln Memorial University-College of Veterinary Medicine. Shortly after graduation Dr. Goss moved to Alaska with his two scruffy terriers and his three-legged cat in the summer of 2018 and began working at Kenai Veterinary Hospital. His veterinary interests include feline medicine, sporting/working dog medicine, and theriogenology. During his time off he enjoys hunting, fishing, and playing video games.